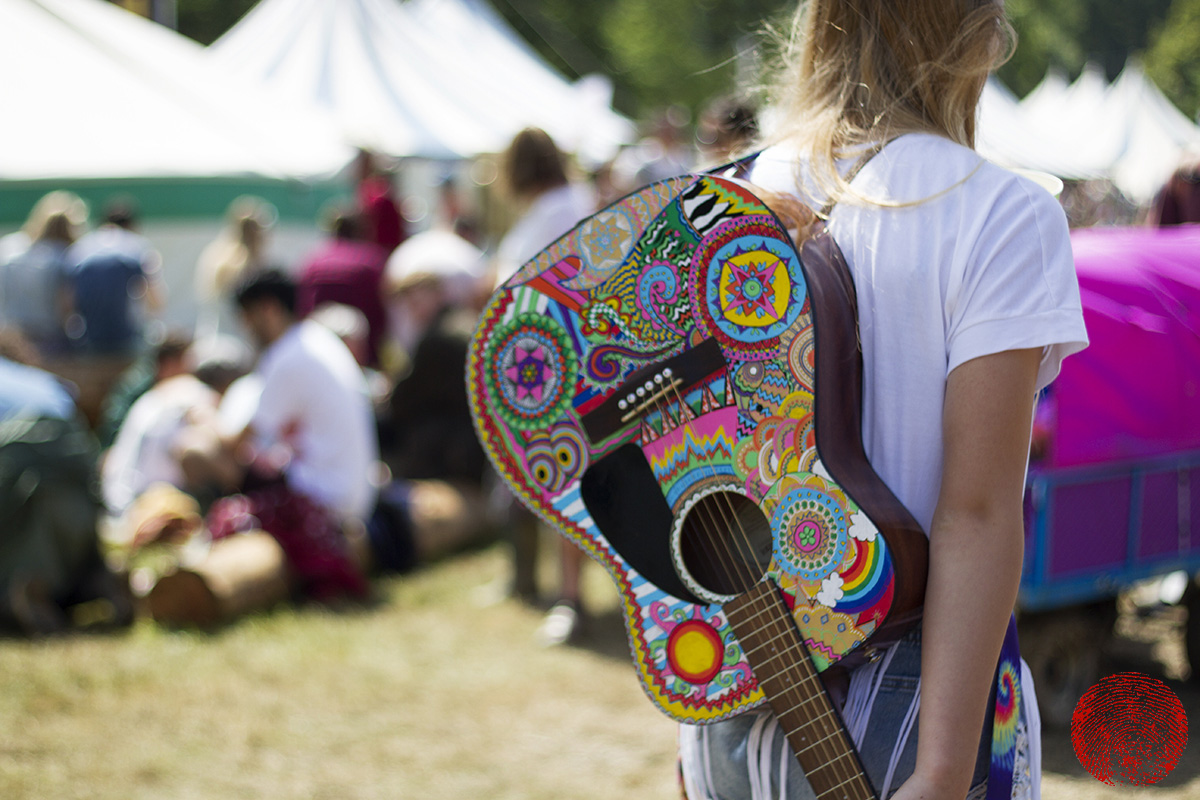 It would be fair to declare this year’s Somersault Festival, which took place this past weekend, a “Sunshine Sandwich” as the fledgling festival (now in its second year) enjoyed a Saturday of glorious British summer weather bookended on the Friday and Sunday by torrential downpours.  Boy, did it rain, but in true Brit-festival style though the audience simply pulled on wellington boots and ponchos and kept on dancing whenever the raindrops started to fall (sometimes sideways), causing steam to rise from the crowds in front of the main stage and the entire site to become a gigantic mud-pit.

I was fortunate enough to attend this year’s event as an exhibiting photographer for the festival’s chosen charity Surfers Against Sewage, and a set of my images of marine plastic pollution (a number of which were produced specifically for this exhibition) were displayed in reclaimed wood frames around the two SAS tents.  It was a real honour to be asked to exhibit for SAS, a charity who do incredible work campaigning for the health and ongoing protection of our coastlines and oceans, and it also meant that I got to attend the festival (and pitch our tent right next to my car in the “Artists and Guests” campsite – probably the only benefit of the fancy red wristband that I was given, but possibly the best considering the weather).  SAS hosted a number of talks in their big, blue, tent as part of their “Ocean Lectures” series with speakers including wooden surfboard maker James Otter, scientist and surf explorer Dr Easkey Britton, Finisterre founder Tom Kay, round Britain and Ireland solo sea kayaker Joe Leach and big wave surfer Andrew Cotton – who I led a very last minute Q&A session with onstage when SAS campaigns officer and festival lead Dom Ferris had to dash off to do a radio interview.  There were daily handplane making workshops run by Otter Surfboards, music workshops with musician Millie Upton and a very special exclusive performance by Rae Morris who played to a packed tent just before her appearance on the main stage on Saturday.  In amongst all of this the team of SAS regional reps and volunteers collected signatures for their Marine Litter Petition, sold raffle tickets and signed up new members from amongst the festival audience – they worked tirelessly despite some awful weather, and were a pleasure to share the weekend with.  There was more to Somersault than just the SAS tent, however, and I got to watch The Staves perform (they are wonderful, but every time I have seen them live it has rained so hard that I have been soaked to the skin), as well as the wonderful Mankala Band, Bombay Bicycle Club, Jimmy Cliff, Cornwall’s very own Rogue Theatre, and the incredible Young Blood Brass Band who rounded out a great weekend of music and good times.  When the rain wasn’t completely rodding it down, I managed to pull my camera out and fire off a few shots, so if you couldn’t make it this year then you can see what you missed and make sure that you get in nice and early next year.  Enjoy: 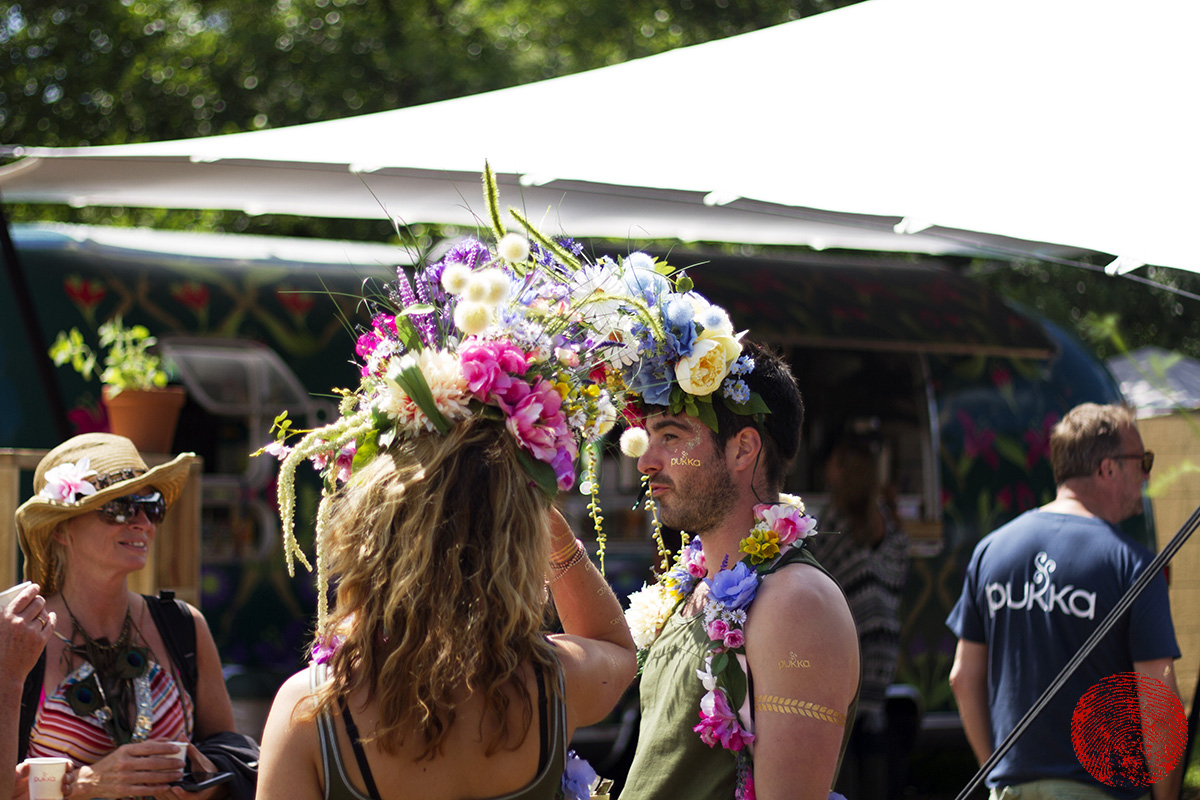 It wouldn’t be a music festival without some outrageous flower garlands. 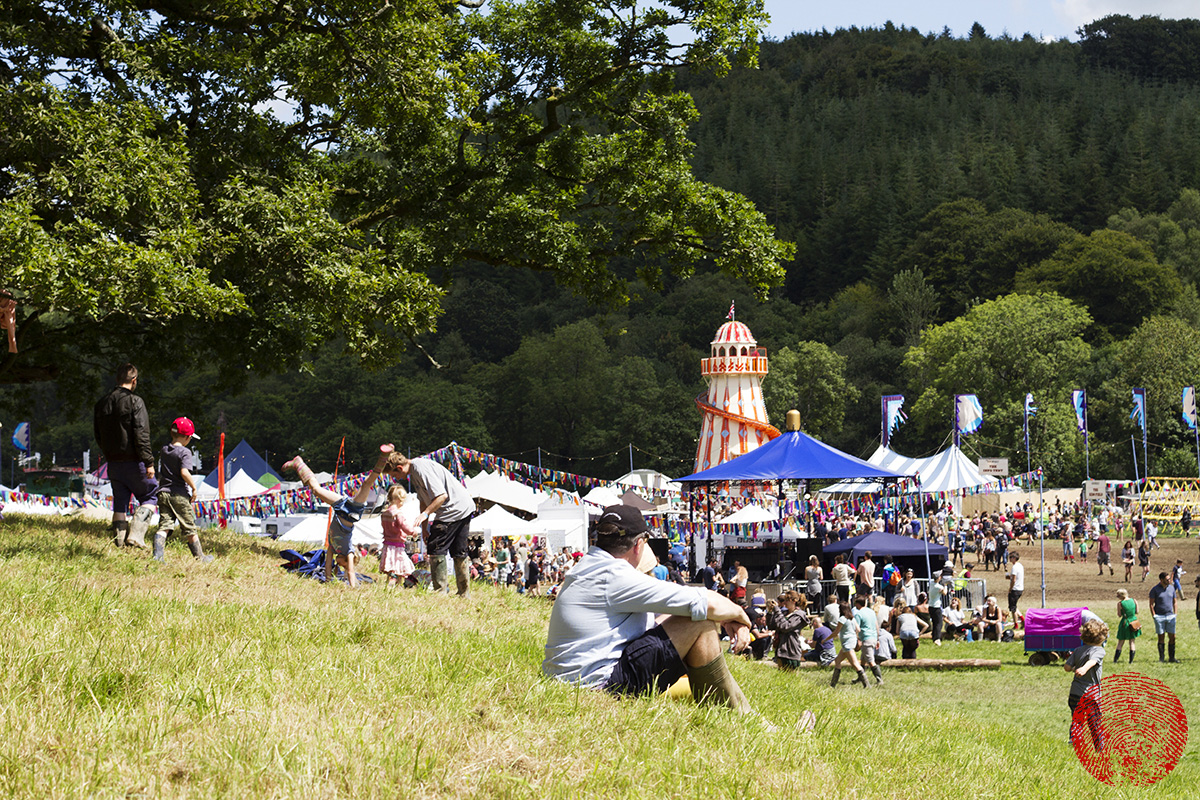 A view of the “southern” arena, on the western bank of the River Bray at Castle Hill Estate in North Devon. 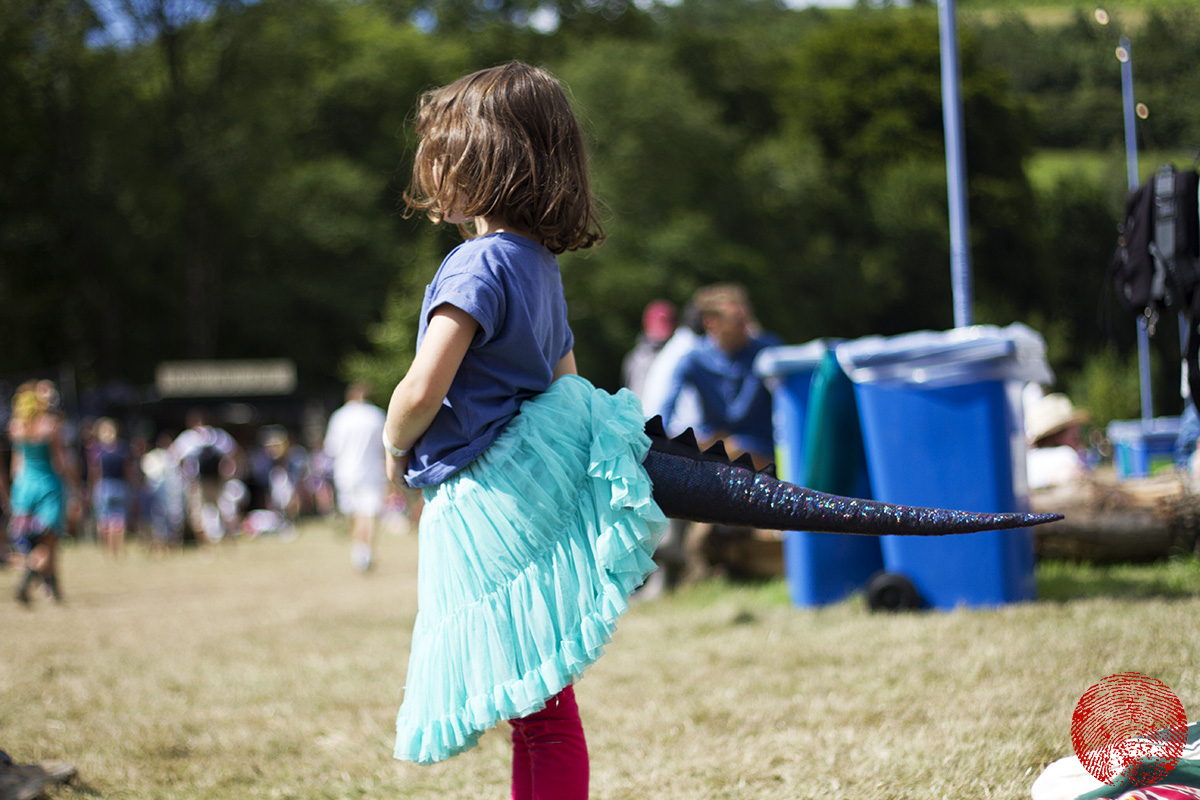 Somersault is fantastically family friendly, and there were heaps of little monsters dancing around. 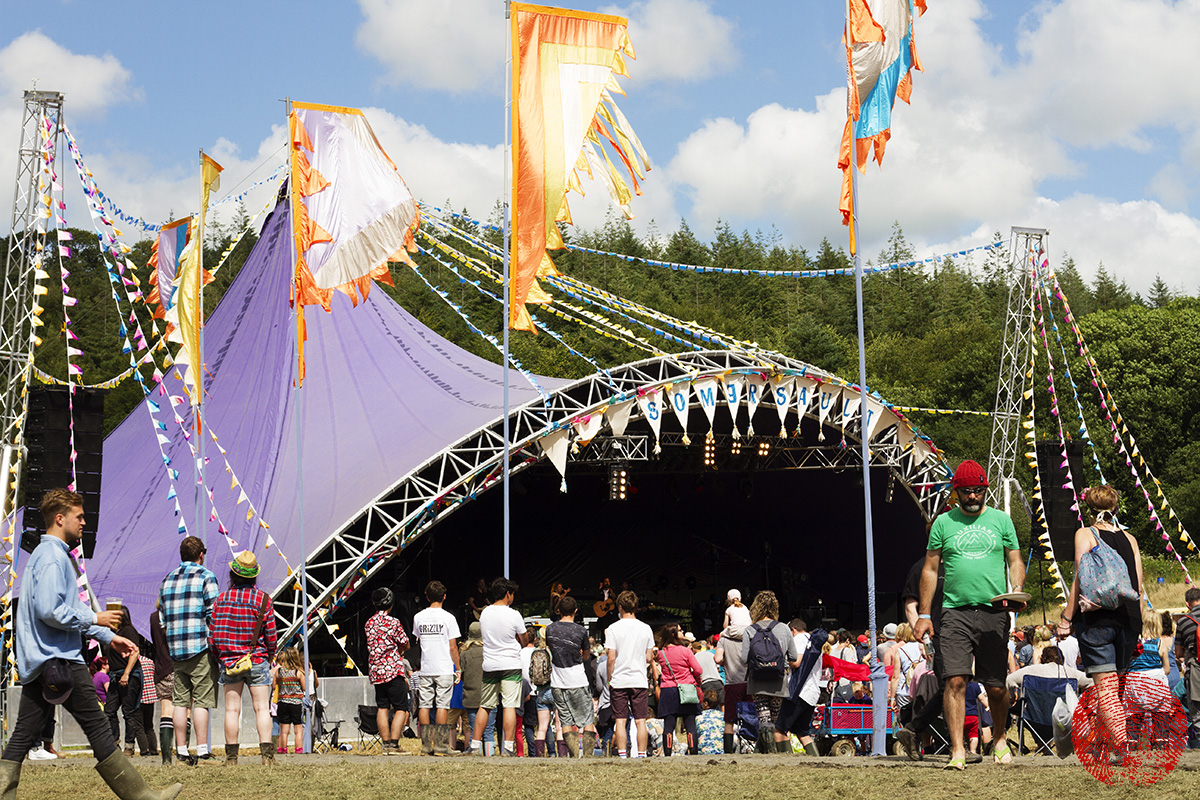 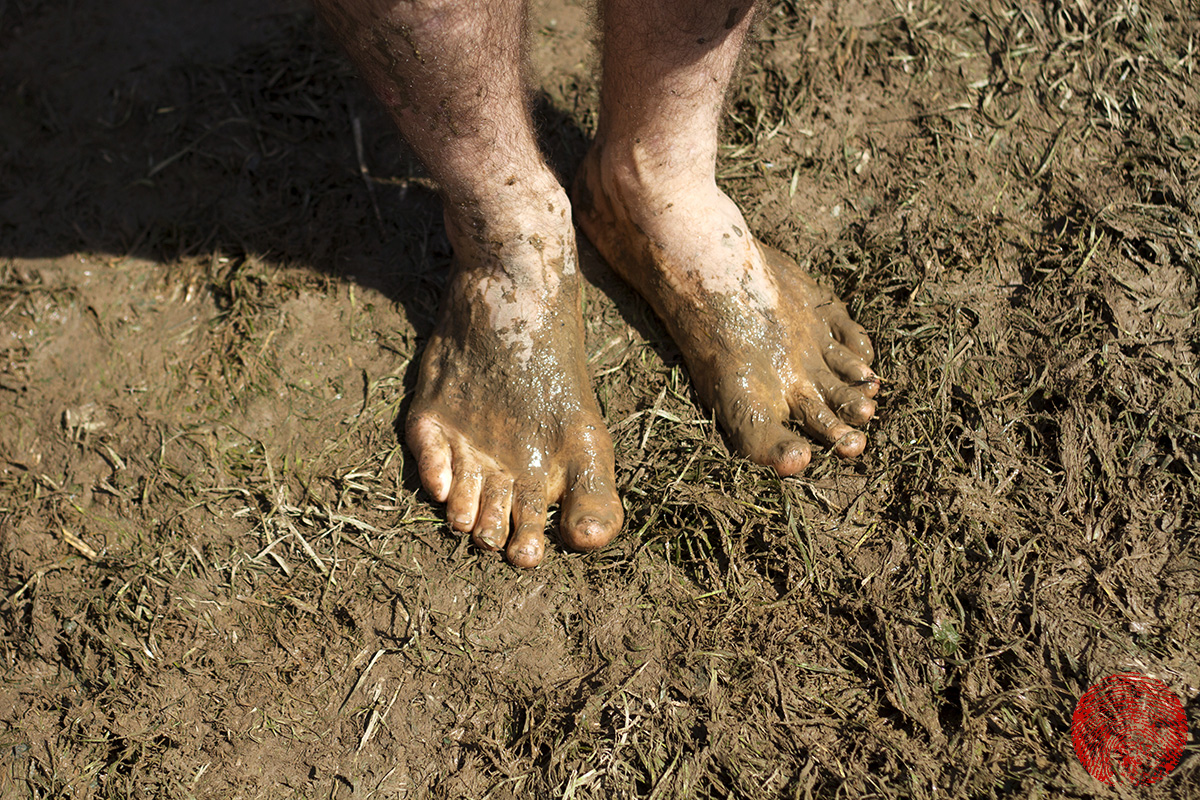 After the rain there were two footwear options available:  wellies, or nothing at all. 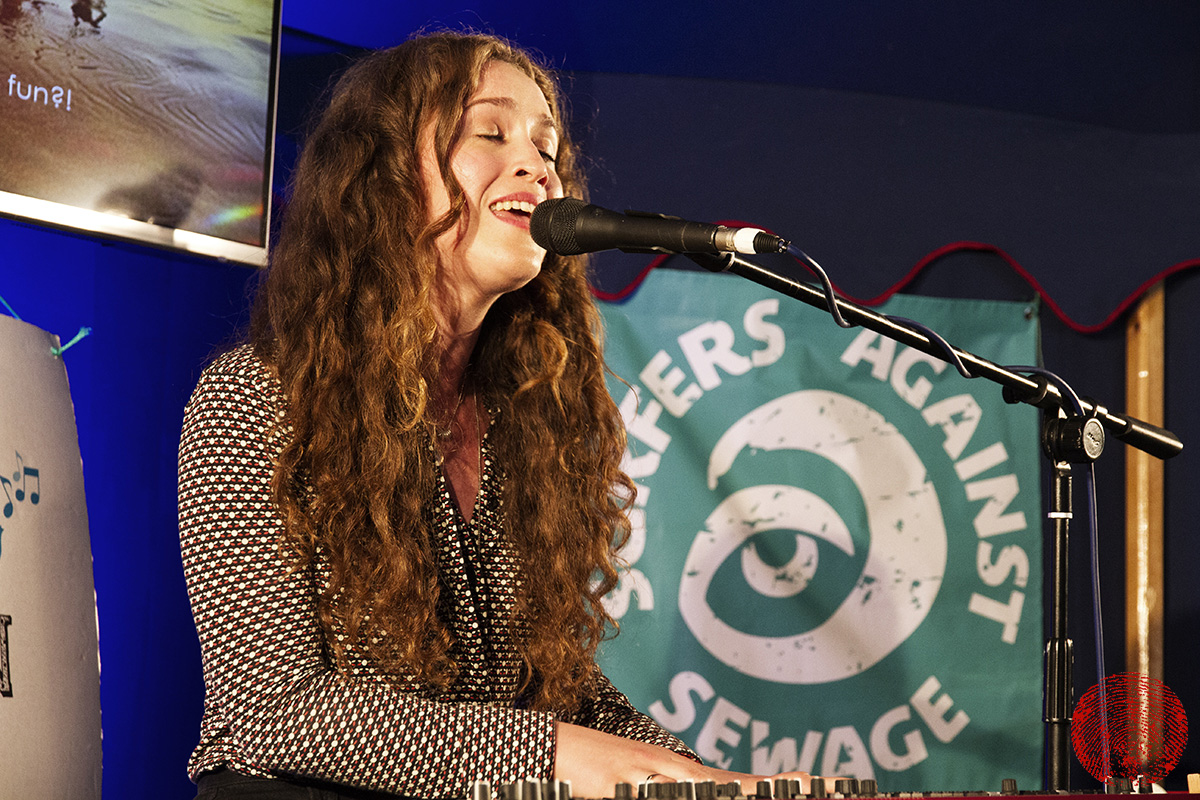 Rae Morris performing an exclusive gig in the SAS tent. 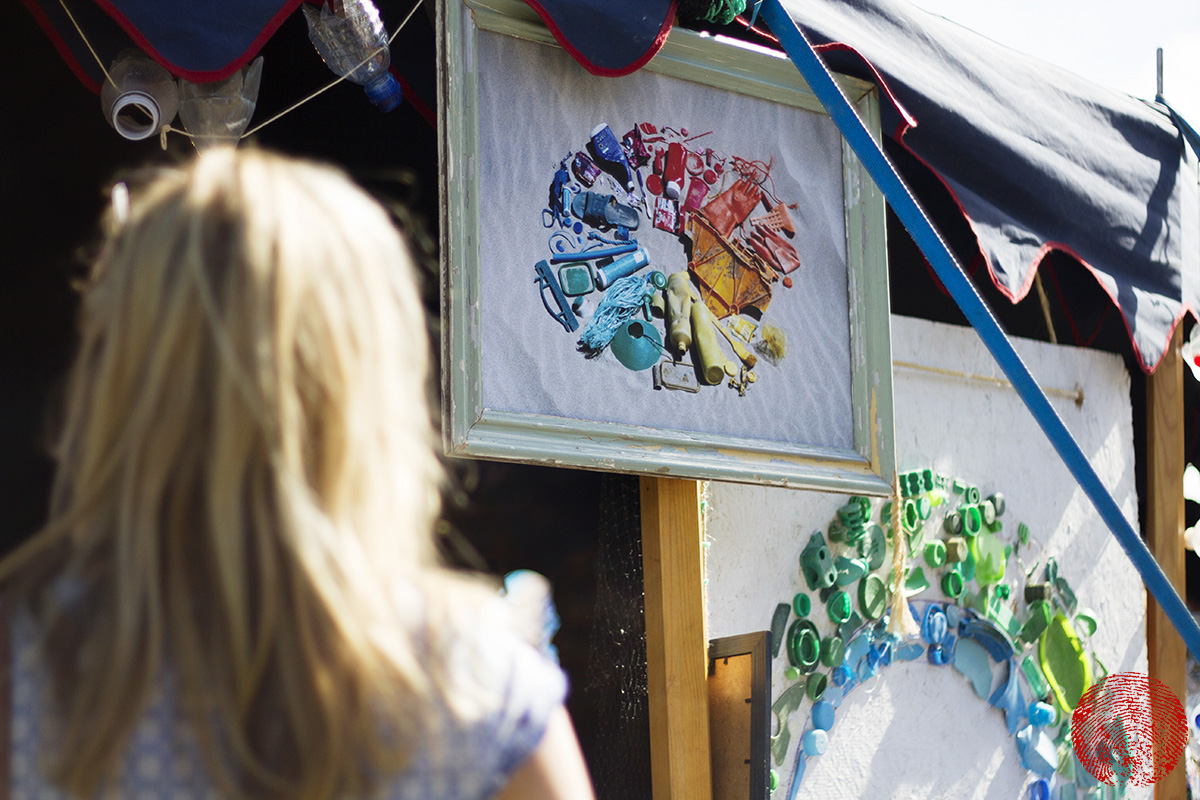 My “Colour Wheel” image on display outside the SAS tent. 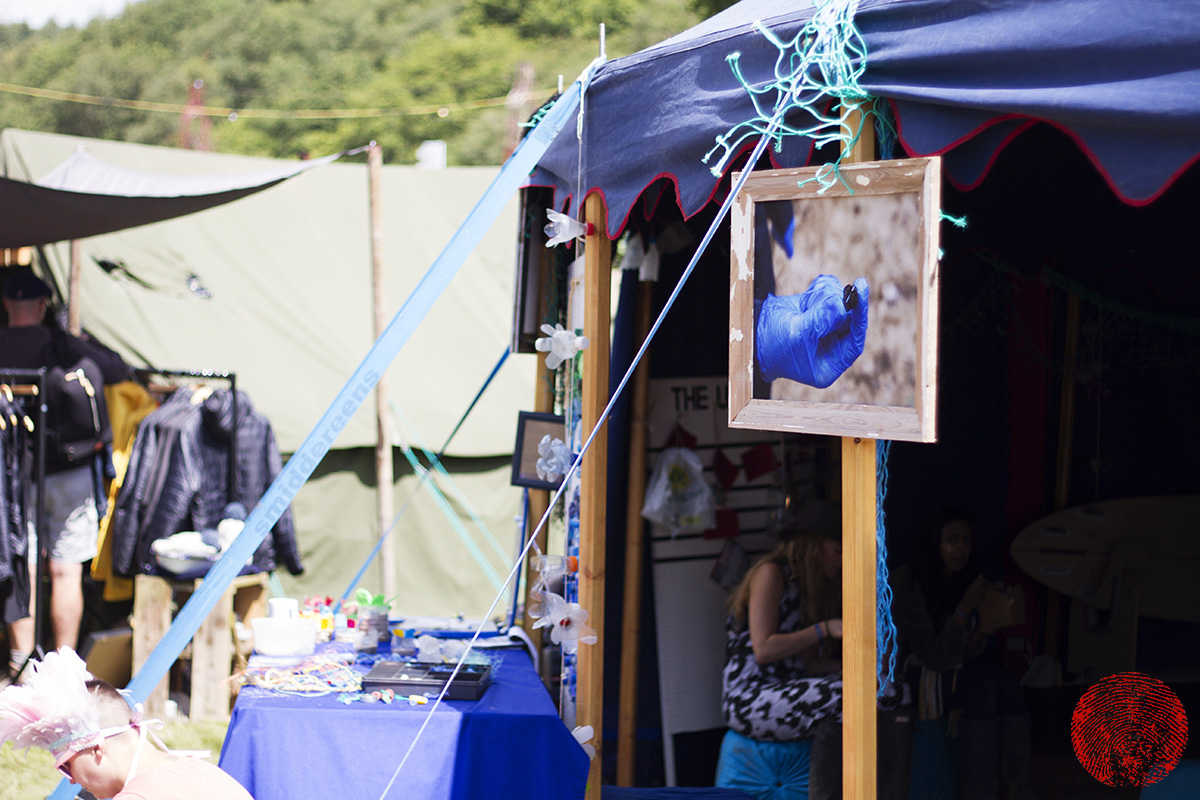 “The Problem In A Nutshell” offering a bit of blue on the outside of the blue SAS tent. 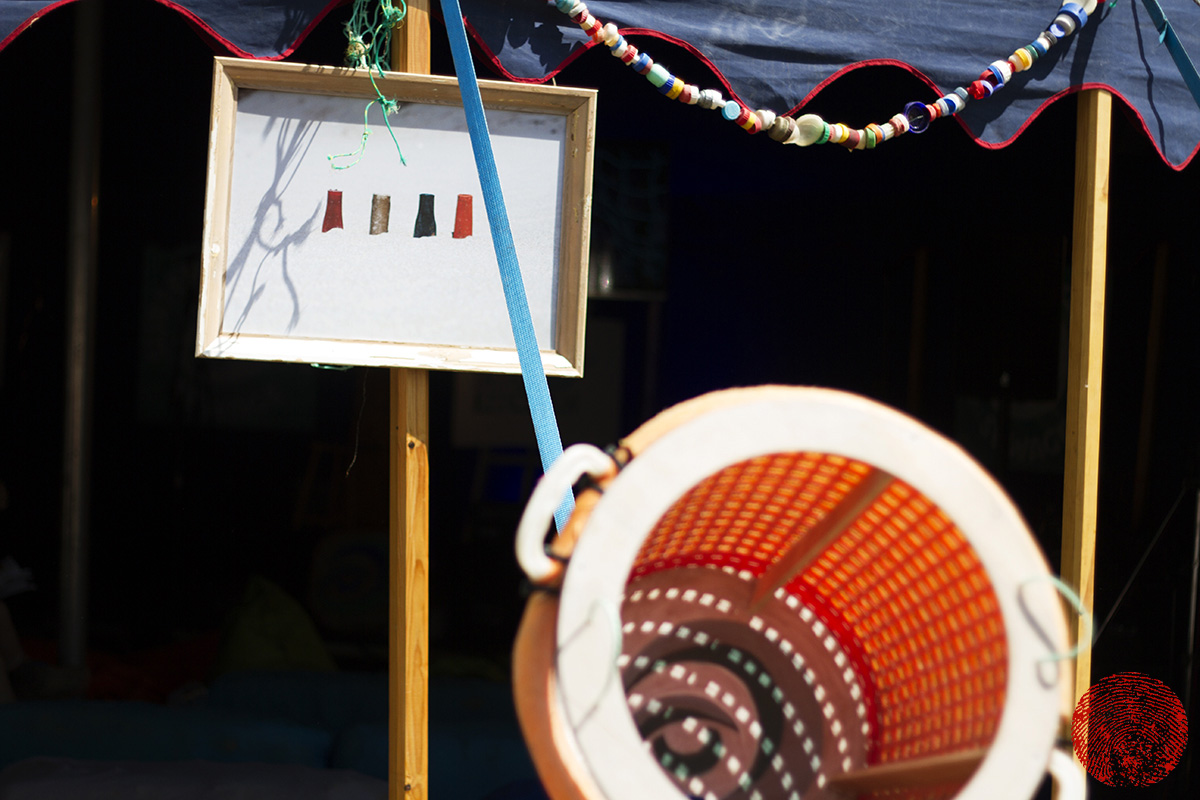 My “Firing Squad” photograph showing a line-up of shotgun cartridges found on a Cornish beach, which probably originated on the east coast of Canada during their water-fowl hunting season. 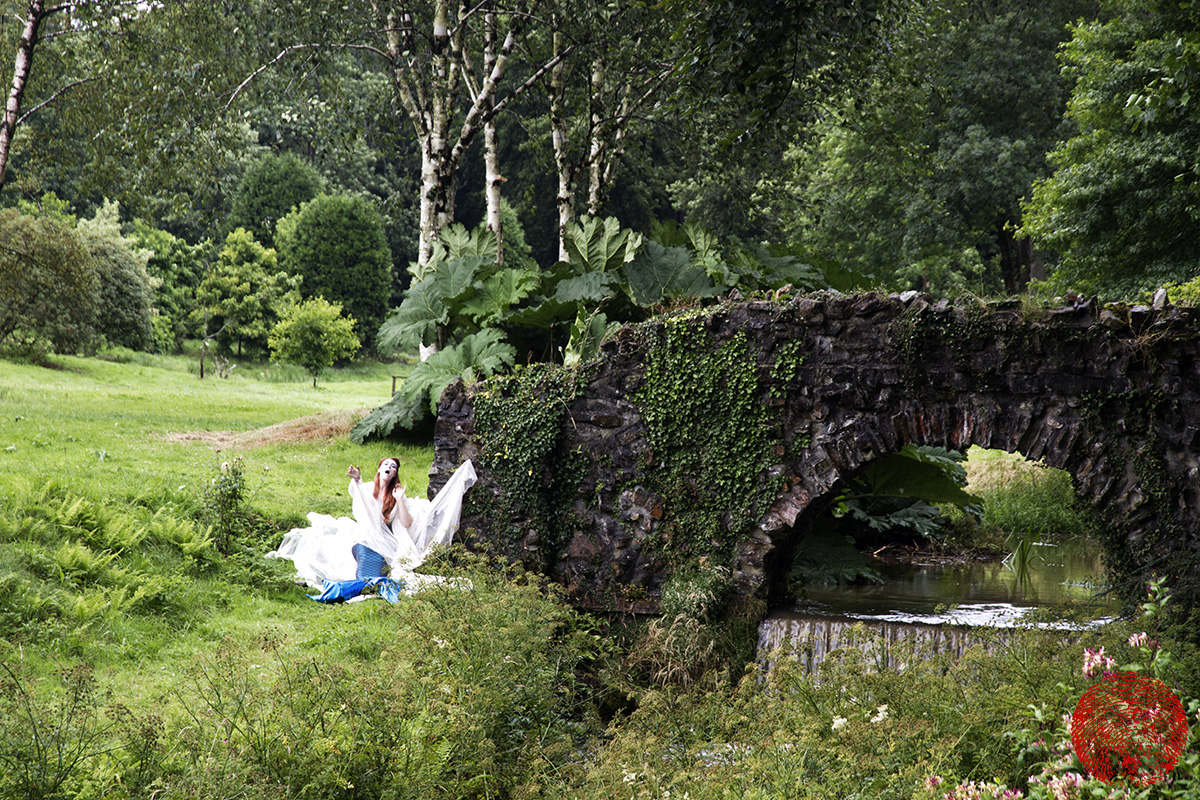 Rogue Theatre brought their incredible woodland show to the gardens of the Castle Hill Estate. 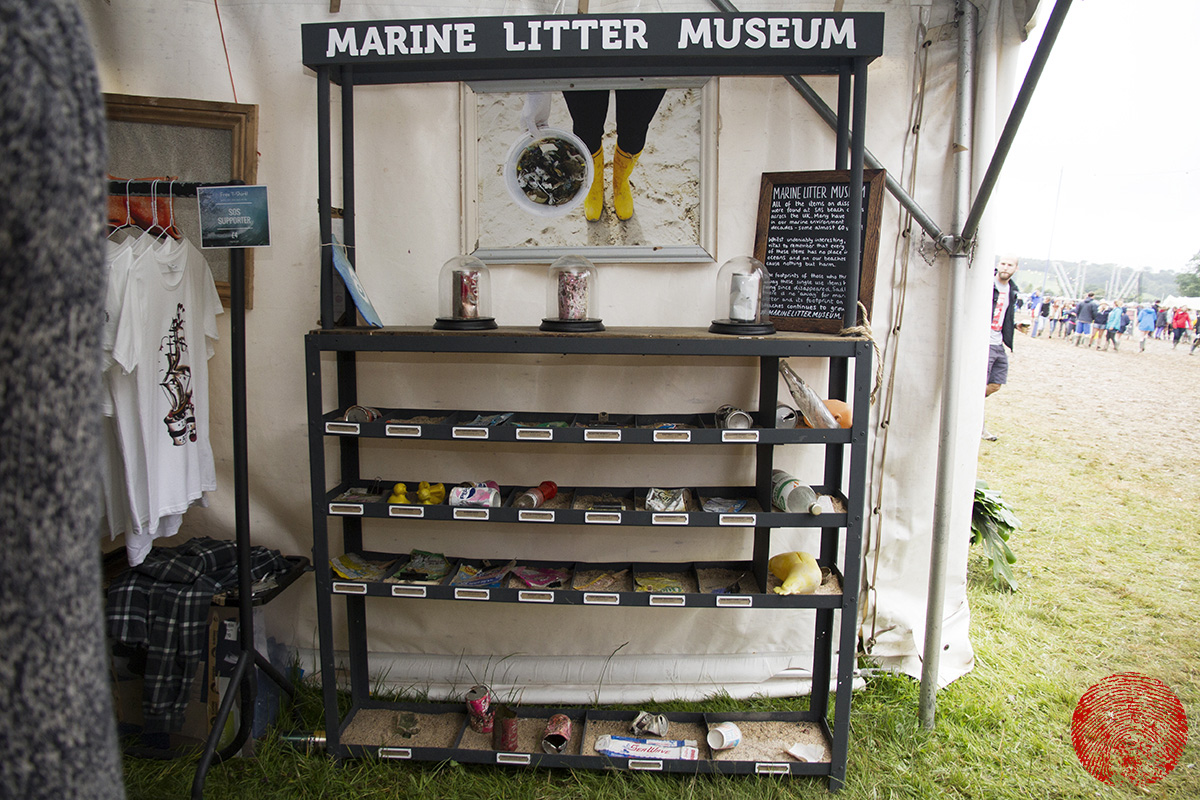 Surfers Against Sewage’s Marine Litter Museum (with an image of mine hanging above it) shows the age of some items found on beaches, demonstrating how litter persists in the marine environment for decades. 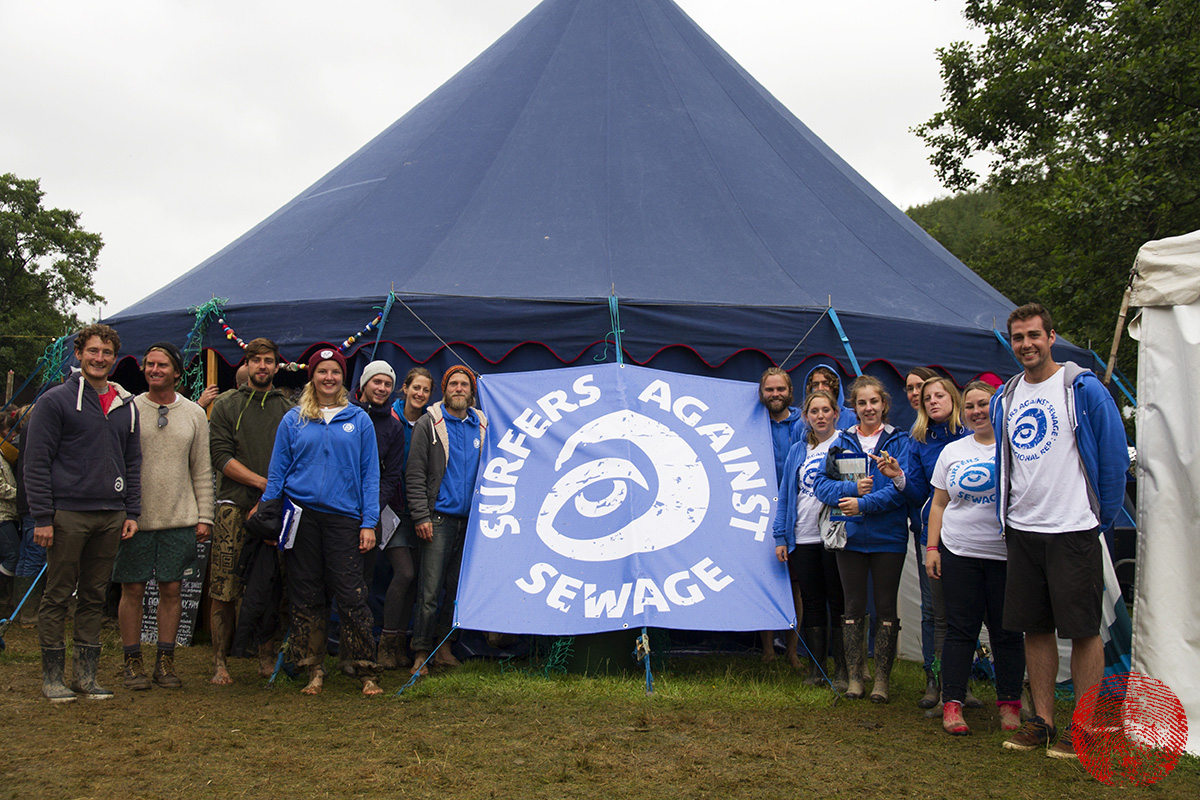 The wonderful team of SAS regional representatives and lead volunteers (flanked by Campaigns Officer Dom on the left and Reps & Volunteer Co-ordinator Jack on the right) who worked tirelessly all weekend in some awful weather to share the charity’s message and engage festival-goers with their campaigns.  Thanks so much for having me along guys.  Please check out the wonderful work that they do and give them your support here.